8th December 2020
With course closures and lockdowns virtually bringing organised golf to a standstill this year, it was a credit to Ian T that a welcome day of golf took place at Pine Ridge. Not a high turnout but, given the recent weather, the course was very playable. John F managed to escape the destructive clutches of his new Rhodesian ridgeback puppy and, as it wasn’t raining, was happy to play.

In an attempt to contend, Peter C enlisted the help of a crow to pick up his ball and move it close to the hole on the 6th.!. Eventually however, in a tightly fought battle, the two top scores were 36 points, with Nej winning on countback.

With the course sadly resembling quicksand in some areas of the fairways, the greens thankfully were in great condition. The longer hitters benefited from the extra distance as there was no roll at all.

Eventually both teams prevailed, coming 1st and 2nd ahead of the 16 other teams. John T, to his surprise, also won one of the two nearest pin prizes on offer.

With a Tier 4 lockdown now in place, the chances for further games this year is zero, but we look forward to staying healthy and playing regularly again when possible.

Happy Christmas and New Year to everyone.


12th October 2020
According to the meteorological agency October 3rd was the wettest day since records began. On the day of our game at Goring the Gods were trying again. The light drizzle on arrival turned into low cloud, mist and eventually fairly heavy rain.

Unusually, we were all able to sit down for tasty early bacon rolls (No great chef skills required). Suitably emboldened, we set out up the first three vertical holes into the clouds. Ian D eventually had to put on some waterproofs over his T-shirt and John F defied convention by not only ‘not’ complaining about the wet weather or arthritis, but by playing well enough to come 2nd. Others were not so immune to the conditions and scores suffered. The evening meal was a welcoming magnet to return to the club house, with the final groups appearing out of the dense mists and darkness. Michelle, not a lover of venturing to play golf in the wet, announced in no uncertain terms that she would NEVER EVER play in the rain again. I guess that’s her final word on the subject!

An interesting plate of food followed!. Although most people had at some time in their lives sampled pulled pork, the fact that it was formed into a hard ball and served with a garlic laced mayonnaise was certainly unusual. The chips looked great, but that’s were their allure ended.
A robust comment was sent to the club.!!!!!!!!!!!!!!!

Due to circumstances fines were not handed out but "next month would be doubled" according to the captain.

The event was Mark Turvill's 100th in the society and an engraved tankard was sanitized and presented to him to recognise the moment.

Congratulations to all of the prize winners who defied the conditions.

This seasons final Order Of Merit can be seen here


9th September 2020
With the world still adjusting to lockdowns and the occasional bouts of freedom, it was good to have a relatively relaxing and ‘normal’ experience at Leatherhead. The course looked like it needed a bit of TLC and, although the greens had been tined and sanded over a week before our arrival, they had not been rolled or swept. This was a shame as it made accurate putting almost impossible. Other than that, a fine competitive day ensued. The Captain, although being one of the last out did an excellent job of collecting the misdeeds suitable for heavy fines, which in the end totalled £44.


Frazer, Dave Shorter ,Ian and John Furness paid for practicing on the course the week earlier, with Michelle suffering for breaking her Bunkers Keyring (one of the worst crimes known to man ........or woman!. Ray Steel did not even have a keyring, (Kept complaining he wasn’t given one, a guarantee of a fine every time) Frazer (somehow, but not unusually disrespected the Captain before play began and Luke has got to remember that Ian T’s name is Ian.Ray for not stirring John F’s coffee that he got for him and John F for getting Ray to get his coffee. All players who beat the Captain were fined as was Luke for a couple of verbal outbursts. From then on fines were made up on the spot (which obviously The Captain couldn’t remember).

Congrats to all the worthy prize winners (including John F who bagged two) and the overall winner Colin T. 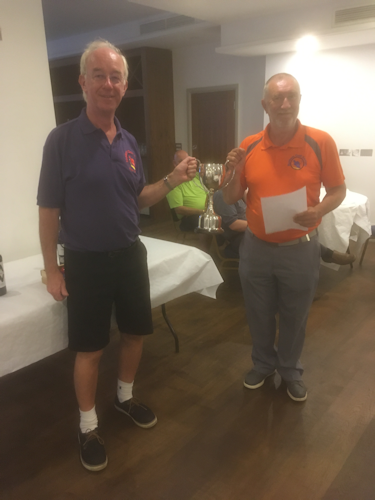 And last months winner, Michelle, finally getting the trophy that wasn't brought along last time. 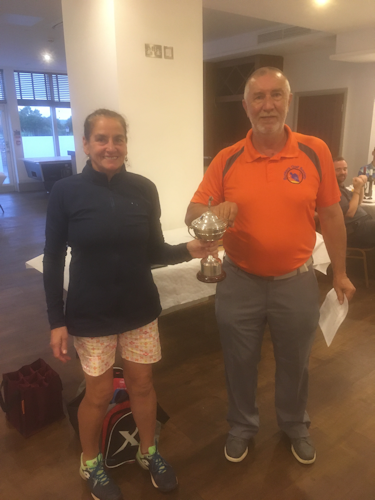 The current Order Of Merit can be seen here


18th June 2020
With very strange times interrupting the Bunkers season this year, it was not too surprising that the last event before shut down was called off because of rain and this event commenced with dark clouds and rain for the early starters. Michelle surprised everybody by not turning up...citing inaccurate weather apps; and JohnT surprised one and all by arriving in the rain.

Play for everyone was a novel experience, except for those who were members of those clubs that had allowed play during loosened lock down. It was good to be back on a course, although lack of a hearty breakfast/lunch did affect some people’s equilibrium (mentioning no names JohnF, Frazer and DaveF).

Congratulations to the winners who overcame starvation!

A successful day, with many thanks to Sherfield Oaks for accomodating us and being flexible about the whole event. The course received mixed feedback from players, but at the end of the day it was good to be out again. Everyone now looks forward to seeing what we can do about the remaining events as the year unfolds.
Roving reporter: John Thorp, ably assisted by Editor: Frazer Webb

The current Order Of Merit can be seen here


17th March 2020
Well what a start to the year we've had. The first event was due at Test Valley a few weeks ago but due to the torrential rains we'd ben having we had to cancel that on the morning of the event. Now just a week before the next event at Cuddington we've had to call that off due to the ongoing Coronavirus situation.

We've also taken the decision, sensibly I think, to cancel the events at Test Valley on 20th April, and Puttenham on 30th April.

We will review the situation in time for the May event and communicate what is going on.

I am sure that at some stage later in a few months normal service will be resumed, but for now, keep an eye on your emails for changes and above all, stay safe.