Sorry there's been no updates for the last few months, but the normal roving reporter has been out of action and not roving, or reporting :-) He is now on the mend and we hope to see his notebook out on the course next month.

October saw the end of this years Order of Merit, a surprisingly normal year despite the ongoing pandemic, and sterling work by Ian T to reorganise the 2 March events (we were still in lockdown then), last minute venue move for Septembers event, and getting 99% of next years events already booked - next years dates are available in the members area.

All the talk prior to the event was whether Ray could snatch the OOM away from the runaway leader Paul H. Ray's chances of winning were on a par with Red Rum winning next years Grand National, but hey you never know, Elvis could be in the grandstand watching it!

So as per tradition the contenders were in the 1st group out, with James acting as referee, with orders to separate them if clubs started to fly :-) But as it turned out, the normally unflappable on form Ray bottled it big time, and so in the end the runaway leader ran off in to the gloomy sunset with the trophy.

Well done Paul, and so nice to have someone other than COVID win the Order of Merit this year. 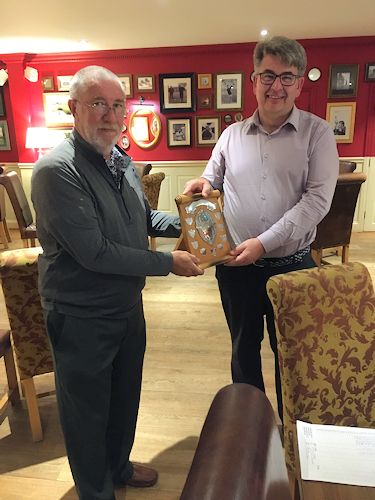 As for the rest on the day, well it was a disappointing turn out of just 13 players, but the stalwarts still had a good time on a lovely course, with some great food afterwards. Generally the scoring was good, unfortunately for Ray's chances, with over half the field over 30 points, and 3 players bettering handicap. But the stand out performance for the day was Ian D's 41 points, of an 11 handicap. Excellent play and it meant he walked of with the Trophy for a 2nd year in a row. 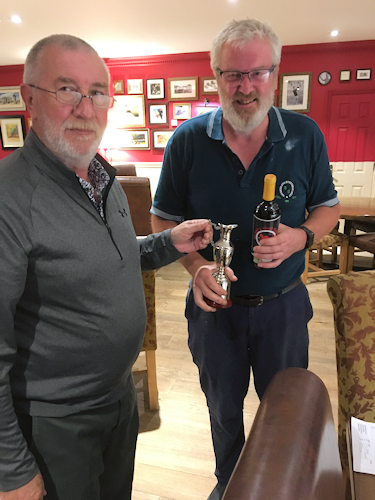