It's great to feel that the world, and particularly the golf courses are opening up again. So a fixture at the Drift was eagerly awaited as was the promised bacon roll before the day started and a 2 course dinner afterwards. Negotiating the club's extensive ground works near the club house was a challenge and anyone with a Garmin was totally confused by the change in hole order.

It was great to see a couple of visitors and Michelle's daughter Jennifer was ably introduced to the society by a very attentive Ray S. Matt T would have qualified as a visitor if a hastily arranged membership fee hadn't been paid. This became significant later as he was the highest scorer (with help from a few trees and a birdie on the 8th from the middle of the 7th fairway, on his home course) and just managed to lift the trophy from the waiting arms of Paul H, who is in excellent form this summer.

One of the great inventions of recent years was introduced by the Captain. The “FINES DOB IN SHEET”. Entirely anonymous for obvious reasons (but we know where you live) it allowed the sneaks and ne'er do wells to show their true colours. Fines flowed freely with Ian D sporting his usual sartorial elegance in black socks and shorts, John T with white socks and sandals after the game and Mark T destroying his shoes in the car park before the game. Which possibly contributed to a social faux pas when he left the lunch table to sit with his Dad (Ahhh). The Captain was honest enough to fine himself at least twice for some very minor infringements.

For those with their ears to the ground, the hot topic this summer has been John F's new super sport GT golf trolley. With instructions in hand, John has been frightening fellow golfers across the South East for the last month. With a GPS system guaranteed to follow the straightest line into the nearest bunker and a remote that has a mind of it’s own, it came as no surprise that Paul H became the latest victim of this hit and run learner driver.

Nej hasn’t featured much recently, as an up market bacon well done customer!, but luminous balls, not telling his playing partners about a concealed ditch and hitting (successfully) a driver off the deck on the 18th got peoples attention and a well earned couple of fines.
Ray S appears again in the fines list with no Bunkers shirt, distance reading on the green and taking the trophy to the worst engravers in the Western Hemisphere.

Matt T receiving the trophy from Captain Shorter, who just happens to be his father-in-law. 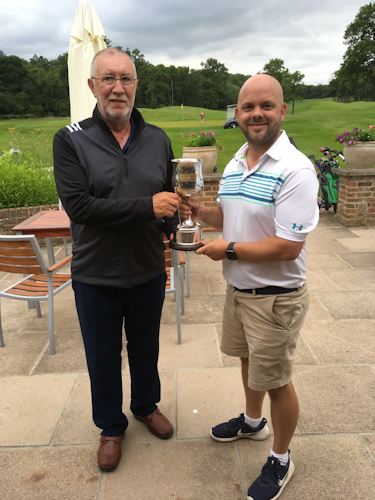