200 events, 204 different players, 57 courses, 42 different winners, 1 hole in one, 3 rice balls, a lemon posset, and 1 flattened trolley! Just about sums Bunkers Golf Society up! Mind you as the number of creeky bones, new hips and new knees mounts up, maybe we should now be called the Old Crocks Society.

The first society event was on 26th March 2001 at Cranleigh. 11 players, Micky Eagle won, with Keith Tilley (NP) and Ian Turvill (NP2) winning the 2 skill holes. A surfeit of Turvill’s even then: Chris, Colin and Ian.

The most singles events won by one person is currently held jointly by Bryan Carter and Chris Turvill at 15 apiece, although Chris is miles ahead of anyone else on the number of skill prizes won with a total of 64 versus the next person on 45.

It took 16 years and 11,753 tee shots before anyone in the society had a hole in one. Ray Steele finally broke the duck on 20th April 2017 at Tylney Park on the 17th hole. Since then, there’s been another 3,236 tee shots and we are still waiting for someone else to join Ray’s one-man band!

Membership has ebbed and flowed but has always hovered around the mid 20’s (not age!), which surely has contributed to the ever-present bon-homie that reverberates in between the dobbing in of people for fine-able happenstances!

The 57 Club’s food and service have predominantly been great, but don’t mention the rice balls at Badgemore or the Pulled Pork Balls at Goring and Streatley – it’s not been all balls, honest! Most of the time it’s Chicken and Crumble – sorry Luke! And for dessert who can forget the Lemon Posset at East Berks, hey Ray?

And with all that we get to the 200th event on 29th June 2021 at Cuddington. In a COVID ravaged time we ended up playing The Winter Shield in June! 23 players were due to play, but because of the weird ways we are at the moment, 1 got told to isolate just as he was getting in the car to go to the course, and another unfortunately had to hang around the hospital for longer than expected. James McPhail won the event (more on that bandit in a moment!), with skill prizes shared by Mike James, Frazer Webb, Colin Turvill, & Ian Dowdeswell. Not a lot changes though - still a surfeit of Turvill’s: Chris, Colin, Ian and Mark! As well as Chris, Colin and Ian, Michael Prevost was also playing – all 4 are notable as they all played the 1st event – not surprisingly they are all founder members.

To landmark the occasion of the 200th event, the society had decided to fund the purchase of polo shirts for all members playing the event, so the course was covered in navy shirted Bunker’ers. Photos were planned, but unfortunately we weren't all in the same place at the same time, so you’ll just have to imagine what we all looked like.

Out and about on the course were the usual shenanigans, heightened no doubt by the sense of occasion. In the unfortunate absence of the finemeister it fell to the Captain to fine his flock:
- His first fine was for himself for playing his first ball straight into the bushes on the first. He then proceeded to play a second (loaned to him by Colin Turvill) into the same bush, (another fine).
- Nej was fined for insinuating Mike James who he said was uglier than usual and the Captain was fined again for stating he couldn’t get uglier.
- John Thorp was fined for changing his shirt in the car park and exposing his torso to all and sundry.
- Ian had multiple fines including driving his trolley into Luke and for making a par 4 a nearest the pin hole.
- Other fines included James McPhail for leaving his money in the car – Ray for sitting having a nice pot of tea – Colin for drinking his beer out of what can only be described as a kiddies party glass – some people for the use of bad language, especially Tony who used it in front of a lady.

There were many other minor fines but the Captain (at his age) only has a very short memory and can’t remember them. All that can be said is very few people escaped a fine.

Back in the clubhouse, and not surprisingly the footie was on, which caused some upset for a few of the players who were taping the game and did not want to know the result. So upset was Mike James, that he decided to forego his meal and not come anywhere near the clubhouse in case his enjoyment got spoilt. Just hope he had the car radio off when he went home! Shame really as Cuddington did us proud with great attentive service and a lovely roast chicken and sticky toffee pudding meal.

Awaiting the winners was a special vintage of wine, carefully and personally pressed by Captain Shorter – just hope he washed his socks first! Bottles of vintage “Bunkers 200th Event” wine were dolled out to the various skill prize winners aforementioned, and a special vintage bottle of champoo for the winner, James.

Congratulations to all the winners, but especially to the overall event winner James McPhail, who overhauled everyone with a stupendous 42 points, 5 points clear of second place. The braying crowd called for double winners cut to celebrate the 200th event. Sorry James 😊 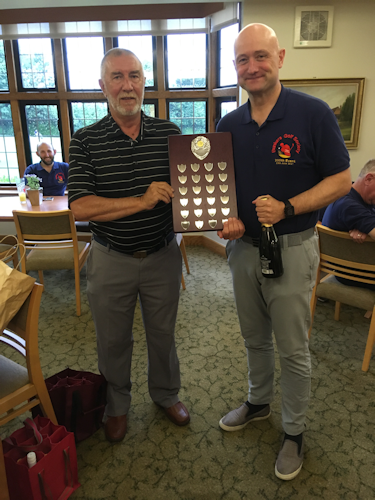 All this success and jolliness would not have been possible without the forward thinking of our founding members Chris Penfold, Michael Prevost, Chris Turvill, Ian Turvill, Colin Turvill, John Waghorn, Paul Warren and our dearly missed friend Paul ‘Macca’ Donlevy. RIP Macca.

Thank you to all the past committee members, and to those currently “herding the cattle”: Paul Beard, Dave Shorter, John Thorp, Chris Turvill, Ian Turvill and Frazer Webb.

We may not all manage another 200 events, but thank you to all who play with us and keep coming back. You must be stark raving mad!!!