How nice it was to have an almost normal event, where we could gather together, have a chat, a coffee and bacon roll before hand, enjoy some good and bad golf, and then sit down for a lovely 2 course meal. As they say, you only appreciate what you had when you've lost it, and after so long not being able to do this I think everyone is going to enjoy every opportunity.

The golf was, as normal, eventful. A welcome return to near normality prompted a heavy response from the Fines Master, prompted no doubt by Frazer's desire to have as much change as possible so it could be used as a float for his wife's upcoming plant sale. Frazer was promptly fined for his role in the shenanigans!

Fines started rolling in even before the Fines Master had even arrived, with both Frazer & Luke being fined for ordering a lunch before the supplied bacon rolls came out. Frazer tried to justify the over eating due to memory loss, Luke as he was building his strength up for the ordeal ahead!

The course today was full of Calamity Jane's:
- Ian D leading his group to 12th tee box instead of the 4th.
- Paul H trying to put his many tee shots into bunkers but none of them stayed in.
- Paul H, again, after an epic hunt for his ball it was found for him and he placed his glove next to it and then went to get his club, then the hunt for where he placed his glove ensued as he couldn’t find it.
- Paul H, again!, believed that he was a film star as he only took his sun glasses of on the 16th and it started raining on the 9th.
- Ian T & Frazer both had matching bright yellow tops on, they totally confused the local bee population.
- Ian T & Frazer both found the wrong fairway nearly taking out the Captains group (and Ian's nephew!).
- Ian T. On the Nearest the Pin in 2 (12th) drove through the green, then putted back past the flag and off the front of the green.
- Ray S for boring play as he only hit it down the middle of the fairways.
- Luke P on hole 3, stroke index 1, birdieing it for 5 points. Yes FIVE POINTS!
- Chris T found a ball better than his so used that one, no points.
- Mark T after hitting wayward shots he substituted the conventional FORE for F@$k it.
- Mark T on the Nearest the Pin in 3 drove the green in 2 whilst the group in front were still on the green and then 3 putted.
- Luke P & Chris T who were playing in the same group, but both had their names on the NP sheet but for the same hole.

Congratulations to those who made it through the rain, and especial congrats to the winners of the various prizes.


Before the presentations for today, we had to revisit last event and present the absent trophy to the winner, Rick Britton. Well played last time out Rick. 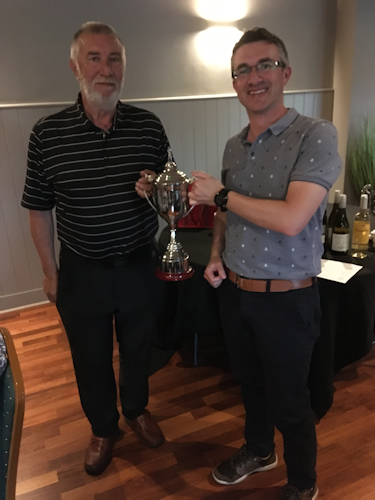 And then quickly on to this events overall winner, Paul Healy, second win this season - his loft is getting rather full of trophies now! 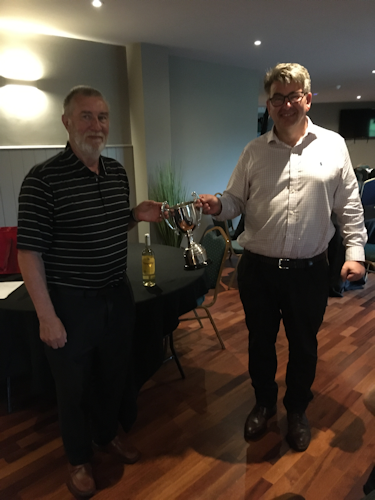 Next up is Cuddington, where due to these Covid-funny times, we will be playing the postponed Winter Shield - in June!!! But it will be a momentous one as it'll be the societies 200th Event. See you there!